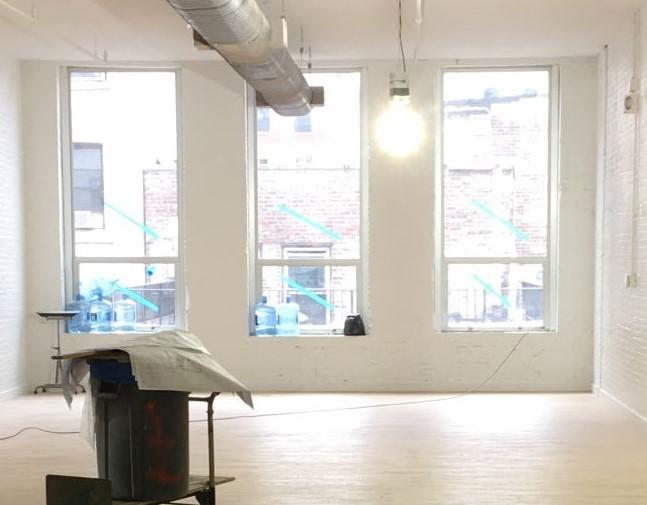 Priority Energy recently flew to New York City to identify the cause(s) of buckling hardwood floors. A newly renovated 5 story office building in SoHo had 25,000 sq. ft. of newly installed hardwood flooring that had expanded across the width and risen at the edges of each plank. (See photo below). This condition, known as cupping or buckling, is usually a sign of more serious problems in the home or building.

Knowing the primary cause of hard wood floor issues is moisture, Priority Energy had a good idea where to begin their investigation.  Immediate relative humidity (RH) readings were taken and found to be between 70 - 85% throughout the building.  Hardwood floors prefer an RH level between 45 - 50%, like we do.  Priority Energy has found anytime RH levels reach above 55-60% for an extended period, the entire building will suffer, as will the occupants; from an indoor air quality (IAQ) perspective,as well as comfort.

We knew we had to identify the source of the elevated levels of humidity, so we conducted a thorough review of the building envelope to ensure there were not any bulk liquid water intrusion points causing immediate damage or higher moisture levels throughout the building.  The envelope was found to have been recently renovated with a newly added 5th floor and roof.  The exterior of the building had been tuckpointed before stucco was installed utilizing exterior insulation, and a proper drainage plane had been included.  While we did identify some minor issues with the adjacent building’s tuck pointing and witnessed some ponding water on the roof, Priority Energy did not believe the envelope to be the root cause of the humidity levels, so we then turned to the mechanical system.

One of our first notes upon exploring the building was the internal temperature.  The entire building had been set to 66° in hopes the air conditioning would remove the moisture from the building.  With an internal temperature of 66° or colder and an air temp exiting the coil as low as 50° or lower, the building was experiencing condensation; on interior walls, duct work, window frames, door frames, floors, etc. Condensation forms when the temperature of a condensing surface falls below the dew point; dew point is dependent upon RH and temperature.  In this case, our dewpoint was as high as 61° in this building – so anywhere the cold air from the ductwork was lowering the temperature below 61° we were seeing condensation.  It was even worse in stairwells, where the temperature of the room was lowering steel door temperatures to 66° – where they were facing even higher humidity conditions.  This condensation was raising the interior moisture levels and thus causing relative humidity levels between 70 - 80% throughout the building.

You may be asking yourself - how would they let the building get this far out of control?  New York has seen an explosion of variable refrigerant flow (VRF) based heat pump systems to heat and cool buildings.  This building was no different; it utilized interconnected VRF heat pumps (Variant Refrigerant Flow) placed on the roof to supply multiple indoor fan coils on each floor for both heating and cooling with a built-in condensating pump to remove water from an internal drain pan that catches condensation off the evaporator coil when in cooling mode.

The problems come when HVAC systems are improperly sized.  In our case, many of the floors of the building have between 15 – 16 tons of cooling per floor – delivered through 4 ceiling-hung indoor fan coils.  Based on our findings we ran our own heat and cooling load calculations for the building. We found each floor, even at peak loads, rarely needed more than 7-8 tons of cooling.  This is when the building would be full of people, fully lit up, and with internal gains (PCs primarily in an office building).  However, the building is still unoccupied and empty.  Furthermore, our load calcs included outside air ventilation, which had also been shut off in an attempt to lower the indoor humidity, given New York’s record hot, humid weather.

We mentioned the use of VRF systems (Variant Refrigerant Flow) because many would say the VRF- based systems should be able to reduce their refrigerant flows low enough to meet the low loads (that’s why they’re called VRF systems after all).    This is only true to a point; 1.) these systems can only be turned down so far, and 2.) depending on the manufacturer the indoor units’ ability to slow fan speed will also limit the turn down and/or dehumidification.  In our case, these were older indoor units and only a 2 stage fan motor and no adjustments to speed could be made.  These indoor units were only able to turn down to a minimum cooling rate of closer to 10-12 tons.  The units are not able to run long enough to effectively dehumidify the air.

We also noted one other problem making the situation even worse.  We hypothesized - because all of the indoor units were running so infrequently, moisture captured by each indoor unit dripped into the drain pan and was immediately blown back into the space from the continuously running fans.  This was happening because the units were not running long enough to capture enough moisture to cause the float switches in the drain pan to switch the condensate pumps on to pump water out of the drain pans.

To test our theory and prove our calculations correct, we set 3 of the 4 indoor units at 75° (but left the fan running to circulate the air throughout the space), and the 4th smallest unit (usually a 3-ton unit) to 70°.  We then monitored temperature and humidity on each floor.  Not surprisingly, each floor was able to maintain 70° and humidity dropped to below 60% on almost all floors within 1 week.  We also noted a significant amount of water could be heard rushing through the drain pipes every few minutes for the first several days from the unit we set to 70°, as it’s condensate pump would kick on to drain the evaporator drain pan.  All but one of the floor’s hardwood seems to be recovering with the RH below 60% and the condensation has stopped because our dewpoint is now 54° or lower.

Long term, we have recommended the owners of the building install ventilating dehumidifiers to both provide outside air to the building (remember it’s currently shut off), and to provide supplemental dehumidification to each floor.  We’ve recommended this because our calculations suggest even when the building is fully occupied, peak conditions (temps over 88°, full occupant load, 100% lighting/internal loads) will create a scenario like where we are today – because it’s unlikely the occupants will have the discipline to only use 1 or 2 of their 4 thermostats/indoor units on each floor.  And we did confirm with the manufacturer of these units they can not be setup to stage.   We were also able to demonstrate this at night or on cooler cloudy days when conditions fell back from peak, but outside humidity remained high – the humidity levels would drift above 60% again.

The moral of this story is to get your HVAC system sized correct from the start and make sure your indoor units can modulate to meet your lowest refrigerant levels from your VRF units.  If this building received 8 tons of max cooling on each floor vs. the 16 tons installed, they would likely have never had these issues.